The rent is too damn high.

What was once an eccentric political candidate’s favorite slogan (and the title of a very catchy autotune remix) is today an unpleasant reality for millions of Americans.

September’s CPI report showed that rent jumped a jaw-dropping 7.2% over the past year – the largest increase in four decades. According to an analysis by People’s Action and the Groundwork Collaborative, the median tenant is now paying $97 more per month in rent than they were last year. With rent comprising a third of CPI and housing now the single biggest line item in family budgets, millions of Americans are on the brink of homelessness.

One key driver of the crisis is the private equity industry. Institutional investors like Blackstone and Greystar have acquired massive amounts of rental housing, maximizing shareholder profits on the backs of tenants by jacking up rents and slashing maintenance spending. The Fed’s interest rate hikes will also make the crisis worse, pushing many would-be homebuyers into the rental markets, deterring new housing starts, and putting additional upward pressure on rents. Indeed, the rent is too damn high – and it’s only going to get higher.

With America’s housing crisis too widespread to ignore, the news media has begun devoting more coverage to the issue. Over the past few months, rent inflation has received major attention from mainstream outlets like CBS, CNN, and CNBC. These stories tend to follow a reliable format: profile a specific tenant struggling to pay their rent, provide broader context and data on the housing crisis, and interview one or two “policy experts” on how to solve the crisis. Despite the press’s increased interest in housing, many news outlets are doing a critical disservice to the public with one aspect of their coverage: presenting industry-aligned analysts as neutral “experts” while failing to consistently disclose their financial conflicts of interest.

One example of this is Lawrence Yun, chief economist for the National Association of Realtors (NAR). Yun is frequently cited as a “top economist” in housing coverage by many mainstream outlets, including the AP, Forbes, CNN, NYT, Yahoo News . These sources rarely provide additional context on Yun’s employer when quoting him, referring to NAR only as a “trade group”.

That’s quite an understatement. NAR is one of the real estate industry’s largest corporate lobbying groups, spending a jaw-dropping $84 million on federal lobbying in 2020 – the single highest amount of any group. NAR regularly advocates for policies that would fatten the pockets of corporate executives and leave tenants out in the cold: the group bankrolled a lawsuit against New York’s rent stabilization law and led the real estate industry’s lobbying push to kill the CDC eviction moratorium. They have spent astronomical sums of money to elect corporate-friendly candidates in both parties who oppose federal legislation to regulate rents or build more affordable public housing. Even other hacks like Jason Furman are amazed the group receives little scrutiny when being quoted by the press.

In interviews, Yun himself has peddled the industry’s favorite talking points. Last August, he claimed that extending the eviction moratorium would “lead to an even greater housing shortage and rents rising faster in the long run” by constraining private market housing construction. In a December CNBC video, he dismissed the benefits of rent control as temporary and said rent regulation would “deter incentive [for the private market] to build more homes or provide money for maintenance”.

Tara Raghuveer, co-director of the grassroots Homes Guarantee tenant advocacy campaign (read more about them on our blog here), offered a concise rebuttal on Twitter to the “supply only” view promulgated by Yun and his ilk: 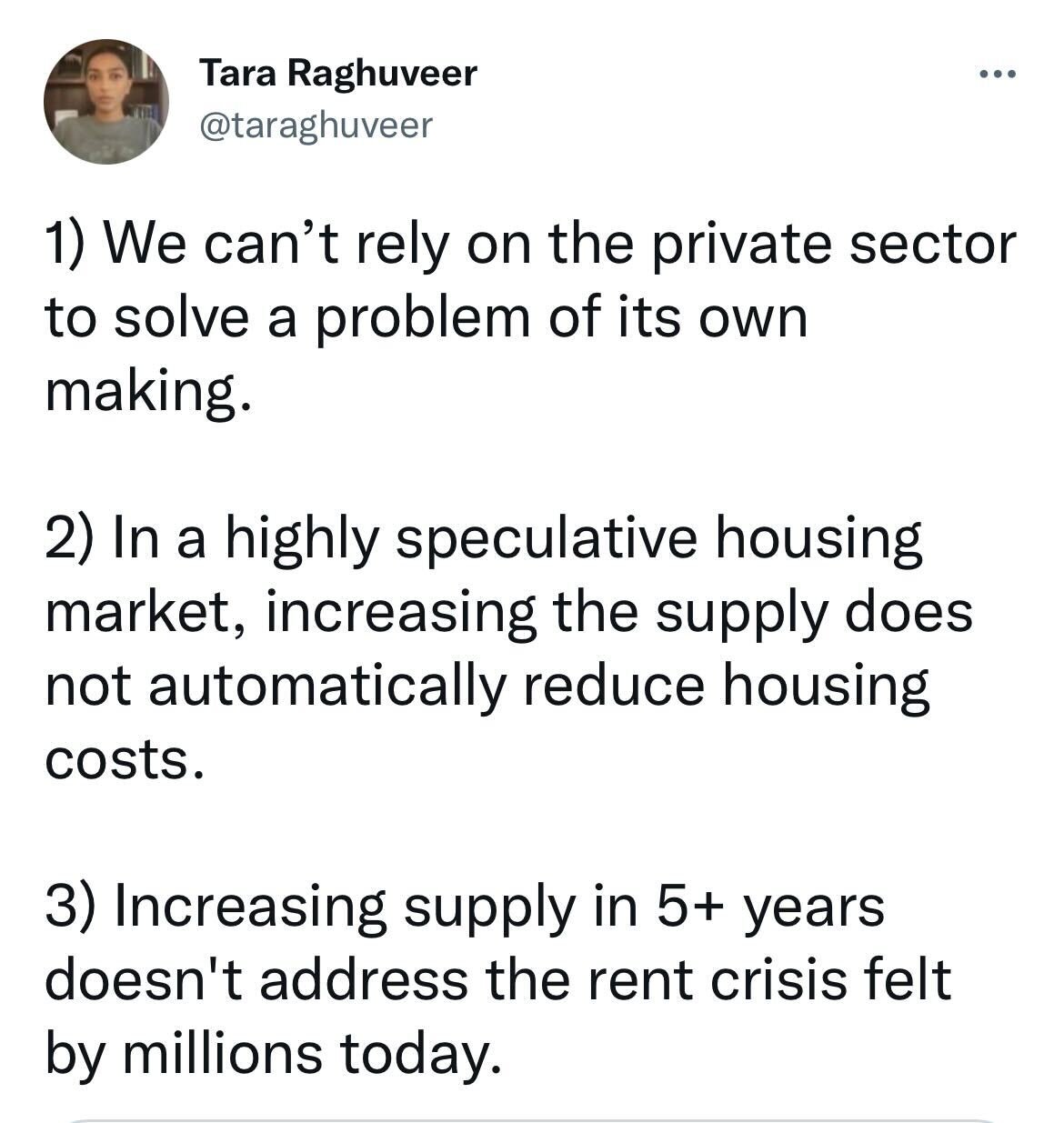 What is “temporary” for well-paid industry flacks like Yun makes a life or death difference for millions of tenants living paycheck to paycheck.

Another viciously anti-tenant industry group that keeps getting quoted by the press is the National Multifamily Housing Council (NMHC). A front group for the private equity industry, NMHC has lobbied heavily for lucrative corporate tax loopholes and joined with NAR on several anti-tenant advocacy campaigns, including the New York rent stabilization lawsuit and eviction moratorium Supreme Court case. Their members include gigantic corporate landlords who evicted thousands of tenants at the height of the Covid-19 pandemic. Last month, tenant organizers interrupted the group’s D.C. fall conference (where Kyrsten Sinema was a guest of honor) to share their experiences as renters in NMHC member-owned properties. One activist described being evicted after losing her husband to Covid-19 and asked conference goers to think about tenants like her – only to be met with boos and jeers from a ballroom of industry insiders.

Nonetheless, outlets like the Washington Post and CNN, have merely referred to the NMHC as a “trade association for the apartment industry” without providing additional context. Others, like the AP, cited it without any identifying information whatsoever.

There are many more examples of industry groups receiving unearned deference from journalists, from the National Apartment Association to the Real Estate Roundtable. One group provides an intriguing test case to see if the press will do a better job disclosing industry-aligned sources in the future: RealPage.

The Texas-based property management software company has been cited by the likes of CNBC, Axios, and the New York Times as a run-of-the-mill “real estate technology platform” and credible voice on rental data. Earlier this week, ProPublica published a bombshell report documenting how RealPage’s rental algorithm software has helped the nation’s biggest corporate landlords and property managers collude to jack up rents (if you’re crunched for time, watch Krystal Ball’s excellent summary of the ProPublica report). On the heels of the report, RealPage is facing major antitrust litigation and harsher coverage from once-friendly outlets like Axios. Will that type of coverage stick? Only time will tell.

By now, the problem is clear: the culprits behind America’s housing crisis are using benign-sounding industry groups as a front to launder influence and advance their preferred policy interests, and the press is letting them get away with it.

The solution? News outlets should stop quoting these real estate-funded hacks altogether. If that’s too much to ask, they must – at the very least – provide additional context on who these groups are and disclose relevant financial conflicts of interest when quoting them.

Another suggestion: the media should embrace the Homes Guarantee credo that “those closest to the problems are also closest to the solutions”, and start treating tenants as subject matter experts. Reporters too often cut away from tenants after getting a surface-level quote or testimonial on rent hikes, pivoting to industry-funded analysts or aloof think tank scholars for answers on policy. Tenants are only qualified to tug at the viewer’s heartstrings, it seems. Asking someone experiencing a problem what would make their problem go away is bizarrely looked down upon, but asking someone who’s read about – but not lived through – the problem is somehow the “smart, independent” thing to do.

Instead, the media should ask tenants themselves what housing policies they want the federal government to adopt. Chances are you’ll hear a lot fewer calls for real estate industry tax breaks and deregulation, and a lot more for basic tenant protections like rent control, just cause eviction, and right to purchase.

I’ve had the privilege of meeting Homes Guarantee tenant leaders and watching them lead policy meetings with top officials at the Department of Housing and Urban Development, the Federal Housing Finance Agency, the Consumer Financial Protection Bureau, and the White House. I have heard them describe in heartbreaking detail the appalling conditions of their buildings and the predatory treatment they have been subjected to by landlords. There is no doubt that these activists have an unrivaled understanding of the problems with rental housing in America that would put any industry flak’s white paper to shame. Browse the campaign’s policy asks of the Biden administration, and you’ll see that these organizers have a rock-solid grasp on the details of federal housing policy and what levers can be pulled to change it.

Here, there are some hopeful signs from some corners of the press. Just this week, the New York Times’ Conor Dougherty and Hill TV’s “Rising” have featured extensive coverage of the Homes Guarantee campaign and Kansas City Tenants – giving grassroots organizers a valuable opportunity to share their vision for housing policy reform directly with the public. More outlets should follow their lead and correct the imbalance of power in media between Big Real Estate and everyday working people. The voice of the tenants – the voice of the people – is growing stronger every day.

Say (or sing) it loud enough for every corporate hack to hear: the rent is too damn high!

IMAGE: Lawrence Yun of the National Association of Realtors testifies before the Senate Banking Committee on July 21, 2022 (C-SPAN).