The FHFA plays an important role in the stability of the housing finance market and the overall economy. The FHFA has the power to place government-sponsored enterprises (GSEs) into receivership or conservatorship. In 2008, the FHFA placed Fannie Mae and Freddie Mac under conservatorship when substantial deterioration in the housing markets left both enterprises in a disastrous financial condition and unable to fulfill their missions without government intervention. Fannie Mae and Freddie Mac are publicly traded GSEs created by Congress to provide liquidity, stability and affordability to the mortgage market. As a conservator, the FHFA can, when necessary, take action to put regulated entities in a sound and solvent condition, carry out their business, and preserve and conserve their assets and property. The FHFA is also a member agency of the Financial Stability Oversight Council (FSOC) which was created in the wake of the financial crisis to identify risks to the financial stability of the United States, promote market discipline, and respond to emerging risks to the stability of the United States’ financial system.

Capacity Issues And Their Consequences

FHFA’s regulatory functions are at the core of its mandate, yet the agency lacks the capacity to fulfill its duties. According to 12 U.S. Code § 4517, the FHFA must annually conduct on-site examinations of the Enterprises and the FHLBanks to ensure their financial safety and soundness. Failure to conduct examinations can have dire consequences on everyday people like pushing borrowers out of their homes. FHFA has been aware of the imbalance between its workforce and workload for nearly a decade. As early as 2011, in an FHFA-OIG report, the agency realized it had “too few examiners to fulfill its oversight responsibilities” and developed a plan to address this problem. Between 2011 and its first capacity follow-up report in 2013, the FHFA had appointed a new executive leadership team for GSE examination oversight and new Examiners-In-Charge (EICs) for the Enterprise core teams. Other changes included making structural revisions to the GSE examination program, increasing the number of GSE examiners by approximately 9 percent between September 2011 and October 2013, focusing on hiring experienced staff members, completing a common examination manual, and establishing an examiner commission program.

In spite of these efforts to ramp up hiring, the FHFA’s hiring process remains plagued by glaring issues. According to their 2013 follow-up report entitled “Update on FHFA’s Efforts to Strengthen its Capacity to Examine the Enterprises”, the FHFA had not yet developed a systematic process to determine the appropriate size of its enterprise examination core teams. Rather, the agency set the size of its core teams largely based on its executives’ judgment and budgetary considerations. The report states: “without a systematic process by which to set the size of its core teams, FHFA cannot be assured that they are adequately staffed to conduct planned examination activities on a timely and thorough basis.” To address this, the FHFA developed a systemic workforce planning process to implement the following recommendations: (1) develop a process to link annual Enterprise examination plans to core team resource requirements; and (2) establish a strategy to ensure that FHFA has the necessary examiner resources to ensure rigorous, timely, and effective Enterprise examination oversight. This process is ongoing.

Inadequate staffing adversely impacted the FHFA’s effectiveness back in 2011, and it continues to do so now. The 2011 FHFA-OIG report found that capacity shortfalls weakened the effectiveness of the FHFA’s Examination Program. For example, the agency had not examined Fannie Mae’s management of its retained attorney network (RAN) or Freddie Mac’s management of its Designated Counsel Program (DCP) until late 2010. RAN and DCP control the costs and promote the efficiency of a wide range of foreclosure activities. In August 2010, Mother Jones reported that failure to oversee their networks of law firms resulted in some firms filing false documents in foreclosure proceedings in an effort to push borrowers out of their homes.

Without staffing capacity, the FHFA will struggle to regulate bad actors that threaten the stability of the housing finance markets and seek to exploit borrowers and homeowners. Yet years after identifying capacity issues, the FHFA is still struggling to effectively ramp up hiring efforts and meet performance goals. For instance, the Division of Enterprise Regulation (DER) claimed to have adopted a systemic workforce planning process in 2014, in response to the recommendations made in 2013. However, performance indicators suggest otherwise. Workforce planning is a “process for identifying and addressing gaps between an organization’s current staff and its future workforce needs.” In other words, it helps an organization align workforce requirements with an agency’s strategic and annual business plans. The DER is responsible for conducting targeted examinations and ongoing monitoring of The Enterprises. The FHFA determined the effectiveness of the DER’s systematic workforce planning process in their 2016 and 2019 Audit Reports. The table below, taken directly from the FHFA’s 2020 Audit Report, summarizes some of their findings. As shown, between 2012 and 2018, staffing levels and the number of completed examinations have either stagnated or decreased. 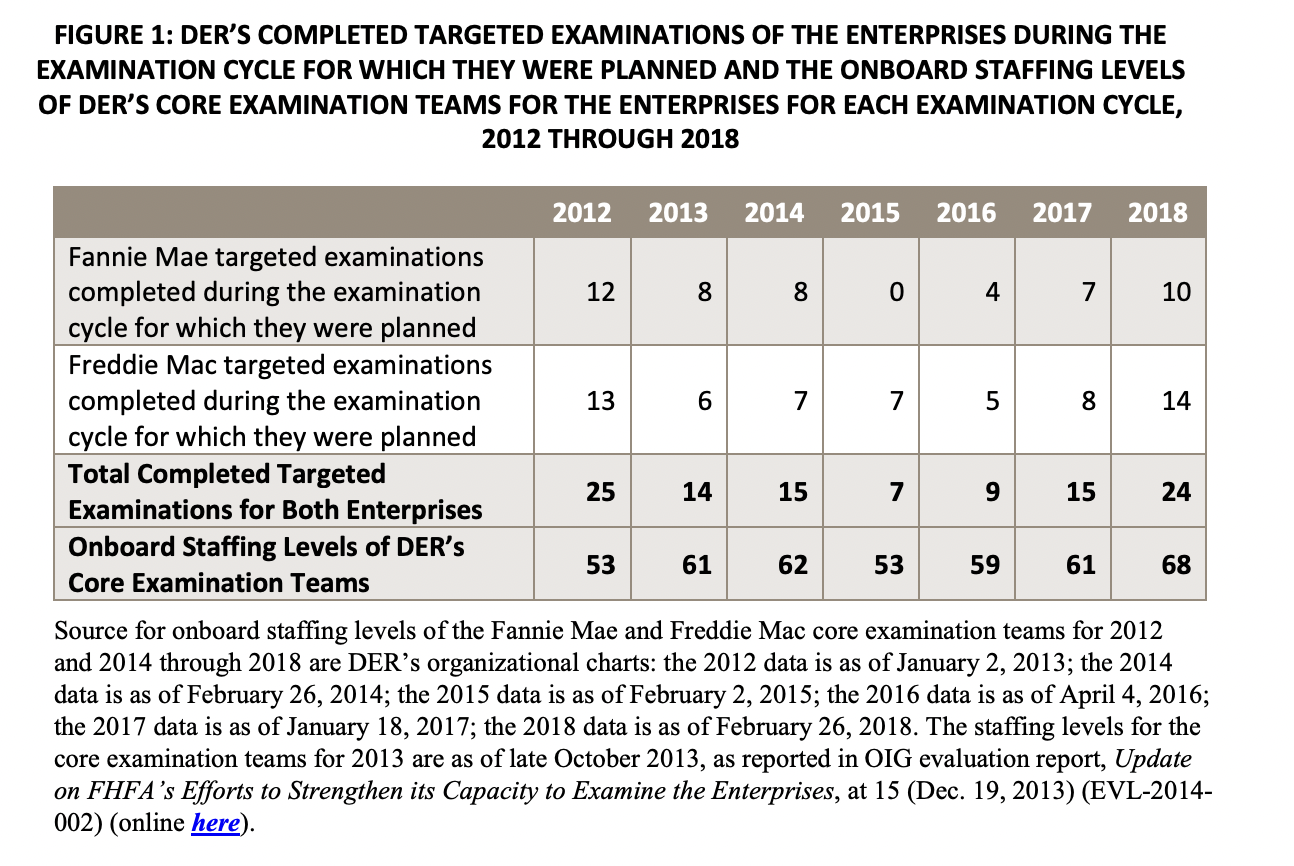 Table taken from: 2020 FHFA Audit Report entitled “Despite Prior Commitments, FHFA Has Not Implemented a Systematic Workforce Planning Process to Determine Whether Enough Qualified Examiners are Available to Assess the Safety and Soundness of Fannie Mae and Freddie Mac”

The workforce increased slightly between 2012 and 2018. However, the number of completed examinations declined or stagnated. As suggested in the FHFA’s 2020 Audit Report, if the workforce planning process was implemented back in 2014, one would expect to see a sustained improvement in the number of completed examinations over time. Ultimately, the report found that, despite the DER’s claims, the division had “not adopted a systematic workforce planning process to determine whether it has the right staff size and skill mix to conduct its statutory supervisory responsibilities, but incorrectly maintain[ed] that the lack of such a process has not impaired its supervision program.”

To this day, the FHFA is struggling to strengthen its workforce. According to their FY 2021 Performance and Accountability Report, the FHFA has not met its objective of reducing the number of days to hire from 106 days in 2021 to 95 workdays, a number still higher than OPM’s government-wide average goal of 80 days.

In addition to catching up on past work, the FHFA’s already strained workforce will be taking on new and vital initiatives under the Biden Administration. For instance, DER had not “established or implemented a quality control review process for its targeted examinations as required by FHFA since March 2013”. Thus, the FHFA updated its quality control guidelines and is planning a follow-up investigation. All the while, it is also tasked with considering and integrating climate-related risks in its policies and programs relating to the housing finance system, Fannie Mae, Freddie Mac, and the FHLBanks, in compliance with President Biden’s Executive Order on Climate-Related Financial Risk.  Integrating climate risks will help safeguard homeowners and renters from financial insecurity caused by climate change. The agency also needs swift confirmation of its Acting Director, Sandra Thompson, so that Thompson can lead the agency to close the racial gap in homeownership and preserve affordable housing.

To ensure that it has the capacity to implement these changes and meet its existing responsibilities on timeline necessary, FHFA should be doing more to accelerate and improve hiring. The FHFA has a unique advantage in implementing workforce planning, as the FHFA is self-funded. Rather than receiving appropriated funds from Congress, the agency collects the funds it needs to fulfill its responsibilities from the Enterprises and the FHLBank (the entities it regulates). The FHFA can adjust how much funding it receives on a yearly basis. Thus, as stated in the 2020 Audit Report, the DER could have increased its hiring budget if leadership so chose. In addition to increasing its budget, the FHFA should look to make use of all available hiring flexibilities, including, where necessary, asking for direct hire authority from the Office of Personnel Management (OPM). FHFA should also work with OPM to identify other improvements to recruitment and hiring practices, drawing from best practices at other agencies.

Achieving old and new objectives will be difficult without staff to efficiently enforce regulation. Human capital is central to the agency’s regulatory function. The FHFA’s failure to implement a system workforce planning process, shorten the lengthy recruitment processes and other hiring barriers already  hinders the FHFA’s ability to keep the housing finance market stable. The Biden Administration and FHFA leadership must address these capacity issues in order to make good on the administration’s promises to integrate climate-risks, close the racial homeownership gap, and preserve affordable housing, to the benefit of all Americans.

Image: “Federal Housing Finance Agency” by krossbow is licensed under CC BY 2.0