As people across the country continue to demand greater accountability for police misconduct, Revolving Door Project is working through its Police Accountability series to make clear how the Department of Justice can answer some of those calls. Part 1 of the series scrutinized the lack of federal, systematic data collection on law enforcement misconduct barring police accountability, explored pockets of power within the DOJ laying the groundwork for police oversight, and suggested 3 proposals. Part 2 of the Police Accountability series called for the relaunching of the Bureau of Justice Statistics’ Arrest-Related Deaths program with a tested redesigned hybrid methodology. This piece introduces a second proposal wherein new conditions are placed on grants awarded out of the Office of Community Oriented Policing Services’ (COPS) in an effort to leverage federal funds to actualize grassroots governed police oversight mechanisms.

What is the Office of Community Oriented Policing Services (COPS)?

The COPS office is a grant-awarding body tasked with distributing, and monitoring, federal funds to law enforcement agencies with the mission to encourage the principles and adoption of community policing by grantees. The birth of the COPS office was one facet of the 1994 Violent Crime Control & Law Enforcement Act.

The COPS office defines community policing as promoting “organizational strategies that support the systematic use of partnerships and problem solving techniques to proactively address the immediate conditions that give rise to public safety issues such as crime.” They stress the cultivation of mutual trust between police and community members as a core building block of the philosophy of community policing. The community partnerships are meant to empower citizens as stakeholders in the public safety of their own communities by helping to identify crime and the underlying social origins that give rise to crime while addressing the needs of the community.

Communities of color and criminal justice advocates have long sought to be the caretakers of their own communities — to have the very people who comprise the community take care of one another, from mental health providers, violence interventionists, and social workers to neighbors, friends, and family members. As it stands, the COPS office does not put enough emphasis on fulfilling this call relative to other reform strategies (see Figure 1). To engender the community protection services envisaged by communities of color and criminal justice reform activists — which fits into the mission of the COPS office — ‘community partnerships’ must be the COPS office’s primary focus & strategy, followed by ‘organizational transformations’ in the shape of delegating current law enforcement responsibilities, accompanied by their respective budgets, to community professionals better equipped to manage those community duties. 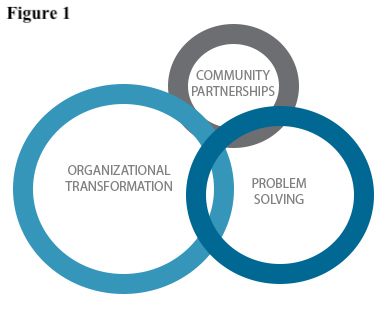 Why are COPS Grants Important?

Police spending has risen over 200% since 1980 and continues to expand, with federal funds accounting for a growing share of the ballooning total.

Law enforcement agencies receive funding from all three levels of government: local, state, and federal. While local contributions remain the largest source of police budgets, federal funds come in second. Moreover, the rate of federal spending on policing, including grant money that is redistributed to state and local criminal justice systems & authorities, increased by a staggering 354% between 1982 and 2015.

Of those federal finances, two programs running out of the DOJ’s obscure Office of Justice Programs stand out as the primary contributors to departmental police budgets: Byrne Justice Assistance Grant and COPS grants.

How can COPS Grants be Amended to Monitor Police Misconduct & Contribute to Defunding Police Departments?

Political leaders within the Department of Justice should work to leverage its grantmaking powers to elevate the police oversight work that is being done on the ground by placing conditions on new funding where legally possible. Current statute restricts the Department’s discretion over the administration of some grants, but others appear to be structured more permissively. Officials eager to apply the law creatively and forcefully may find that these provide significant latitude for action.

One possible course of action that political leaders should explore is if they can use their existing authority over COPS grant funding to systematize and strengthen revamped Citizen Oversight Boards, i.e. grassroots-steered bodies that are empowered to wholly administer the Citizen Complaint process on terms unaffiliated with law enforcement. This might involve updating the compliance conditions of COPS grants and cooperative agreements to make funding contingent on:

In other words, only police departments who’ve met the above prerequisites would be eligible to apply for the COPS grants or cooperative agreements. Both conditions fit neatly within the office’s mission as the former falls under community partnerships and the latter falls under an organizational transformation.

Given that federal funds represent a sizable share of many police departments’ budgets, few, if any, would be likely to reject these measures and forgo federal funds. In other words, with this change, the COPS office could quickly contribute to filling the void of oversight bodies across the country and strengthening those organizations that have been attempting to do this work without formal recognition or power. (See part 1 of this series for further details on why a solidified oversight figure is critically needed)

The few pre-existing, largely ineffective, Citizen Oversight/Review Boards serve as a blueprint for how their structural intricacies must be improved and the rights bestowed on them made explicit in the law. Inattention to these deficiencies could result in the proliferation of COBs that are utterly unable to monitor police misconduct effectively. As such, they only serve to, in effect, legitimize police forces heavily abusing their prerogative power. At bare minimum, committee members must have NO ties or background in law enforcement agencies — this is what ‘separate’ denotes. More importantly, COBs must reserve seats for coalitions of grassroots organizations, social workers, mental health professionals, non-paternalistic neurodivergent/disabilities experts, victim/survivor advocates, and other community members most impacted & vulnerable to police brutality.

Grassroots governed COBs, as a fundamental ‘community partnership’ in charge of the Citizen Complaints process, would advance the project of community policing with respect to building trust. When data on police misconduct no longer is affiliated nor dependent on law enforcement cooperation, it compels unfiltered police transparency.

The theory behind transferring the Citizen Complaint process to the COBs is to foster confidence in the effectiveness of the process and thus encourage the public to be willing to file the complaint forms. Currently, people, particularly of color, are reluctant to do so because 1) they are afraid or coerced into not reporting their incident with police misconduct and/or 2) they feel that nothing will come out of reporting the incident anyway — just additional paperwork stuffed away in storage gathering dust. Our expectation is that a community-based body administering the process would alleviate some or all of these concerns.

However, confidence that the Citizen Complaint process will actualize accountability and/or reparations necessitates changes to the analysis and handling of the data in the complaint forms after they’ve been submitted. The grassroots governed COBs must publish the filed complaint forms in a database that is 100% public and accessible without any fees or any formal requests necessary to retrieve specific forms or the information at large. By opening up the data to the public,

Using Citizen Complaint forms as the metric for police oversight avoids explicitly identifying, which is inherently limiting in nature, what is and what is not considered police misconduct. No committee of experts and professionals can brainstorm all the potential shapes misconduct can take and it would be irresponsible for the government to dictate what is harm (mental, emotional, physical, or otherwise) or when harm has been done to citizens’ bodies at the hands of law enforcement — citizens alone can be the judge of that. Rather, by leaving it open-ended, the Citizen Complaint forms themselves will give rise to patterns of abuse police repeatedly engage in, such as deliberately tightening handcuffs to restrict blood circulation, denying medical attention or relief to victims of tear gas, chokeholds, banging a person’s head on their car, etc. These patterns would be a non-exhaustive and continuously growing list of instances of police misconduct that would foreground investigations by the Attorney General.

The transfer of the Citizen Complaint process would relieve police departments of that responsibility — a prospect law enforcement agencies should welcome given that many frequently express that they are expected to do too much. It is only logical that along with the transfer in responsibility, there is a transfer of resources and funds from the police departments to the grassroots governed COBs. In other words, the budget currently allocated to law enforcement for carrying out oversight at large should be taken away and redistributed to the grassroots governed COBs.

Compliance with these new conditions for the COPS grants & cooperative agreements will be verified “through on-site visits and office-based reviews,” as are existing conditions. Abidance by these two transformative conditions should be subject to the same strict monitoring mechanisms as the original grant guidelines and terms to ensure they’re given equal weight. Watch out for the fourth and final article in our Police Accountability series. which will unpack a final proposal centered on the Bureau of Justice Statistics’ “Contacts Between Police and the Public Series”. The Police Accountability series explores executive branch criminal justice reform promoting law enforcement oversight through the DOJ’s  Office of Justice Programs — housing both the Bureau of Justice Statistics & the office of Community Oriented Policing Services.